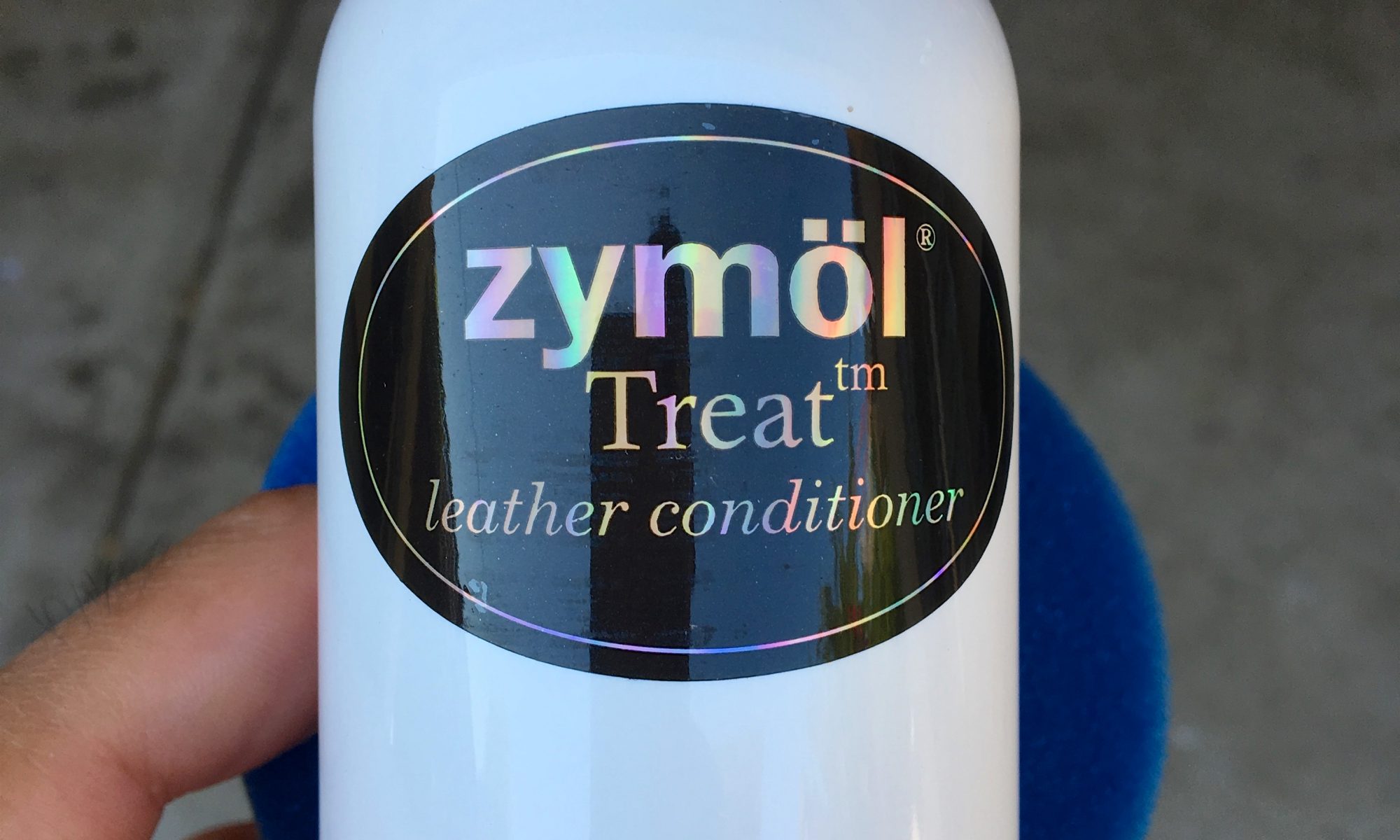 Over the holiday weekend, I picked a warm day to condition the leather. I’ve used zymöl products in the past (their amazing smelling carnauba wax). In other cars, I’ve tried Lexol and Griot’s, but started reading bad things on the internet (image that) about the former. I applied the zymöl leather conditioner and let the M5 warm up in the sun before buffing it out. Worked beautifully. Sorry no photos of the before and after. 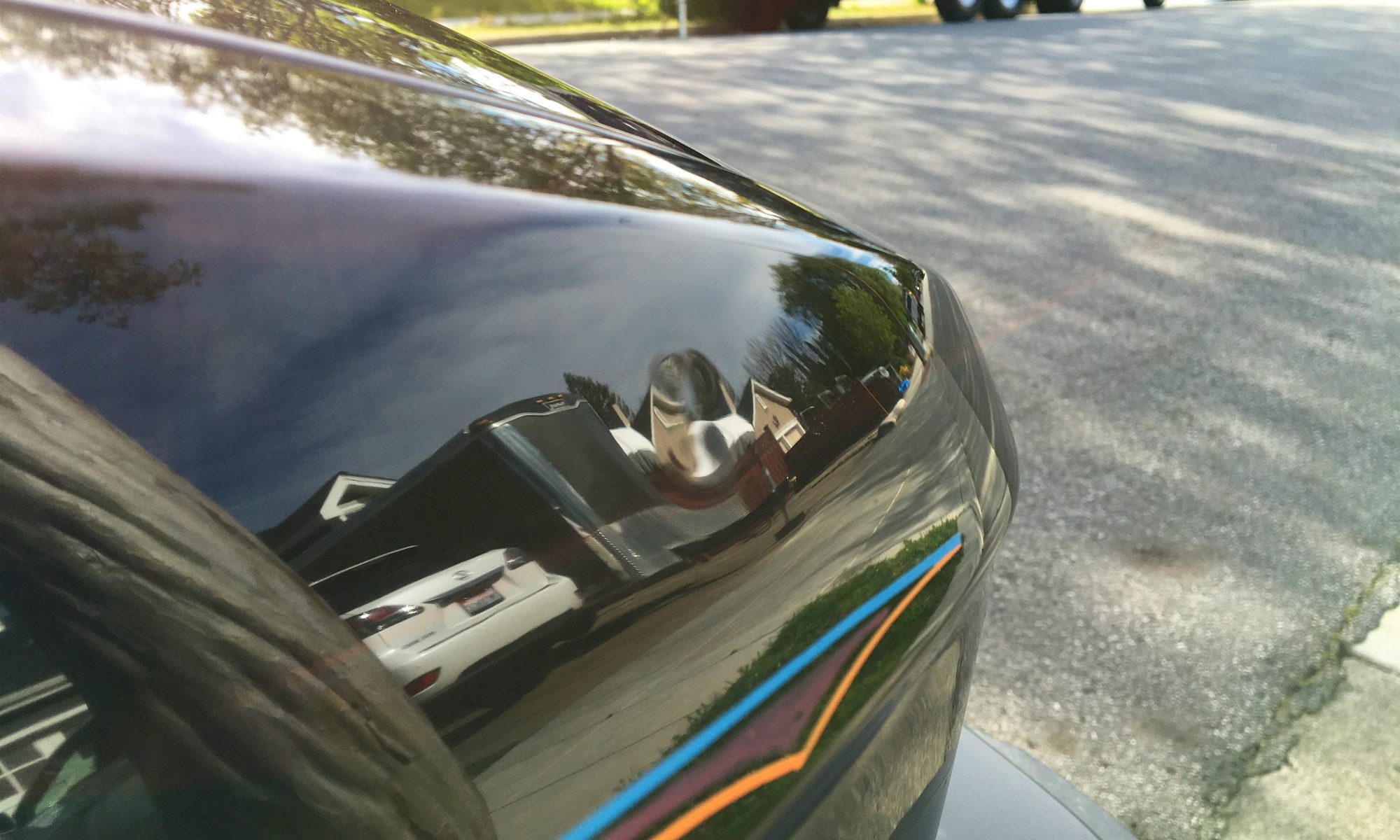 One of the things that’s always hard to see in photos are the slight (and not slight) imperfections in the body and paint. This was especially true of this black M5 in eBay photos, even when photographed very beautifully. The feedback I gave to the seller was that while I can appreciate the low aperture, narrow depth-of-field photos for their beauty, they can and did actually obscure the issues, even if that wasn’t their intention. The feedback was taken to heart.

I had avoided the prospect of painting this car, even though I knew that it would be the sure-fire way to make the body perfect. I felt it would be a slippery slope  to euro bumpers, lights, etc., all of which I think would look great, but would probably not make financial sense as it would be unlikely I would get the money back out, especially for the windows-out paint job I would have wanted.

One step I took to mitigate my desire to turn this project into a money pit was to have the dents removed. I figured that would be on the critical path to painting anyway. I did some research and found “the” painless dent remover in the bay area. I took the car in for an examination and we agreed upon how much and how long it was going to take and how much I wanted to spend. I dropped the car off right before spring break, as we were going to be out of town for a while and he could take his time with the car.

When I returned, I found there were some panels that were a couple spots that were yet to be completed and one dent in particular was on the crease and took up a majority of his time. Originally, we agreed upon $1,000, but given that it wasn’t complete, he told me to pay what I thought it was worth. This put me in a tough spot, so I figured it was about 80% and gave him $800. We agreed to what he would do to complete it.

It does look a lot better and some panels are now perfect. That said, I always wanted this and every other car to be perfect, but after almost 30 years, sometimes that’s just not possible (same with “original”). This is one of the biggest things of which I had to let go, which also helped me avoid going down the paint rabbit hole. 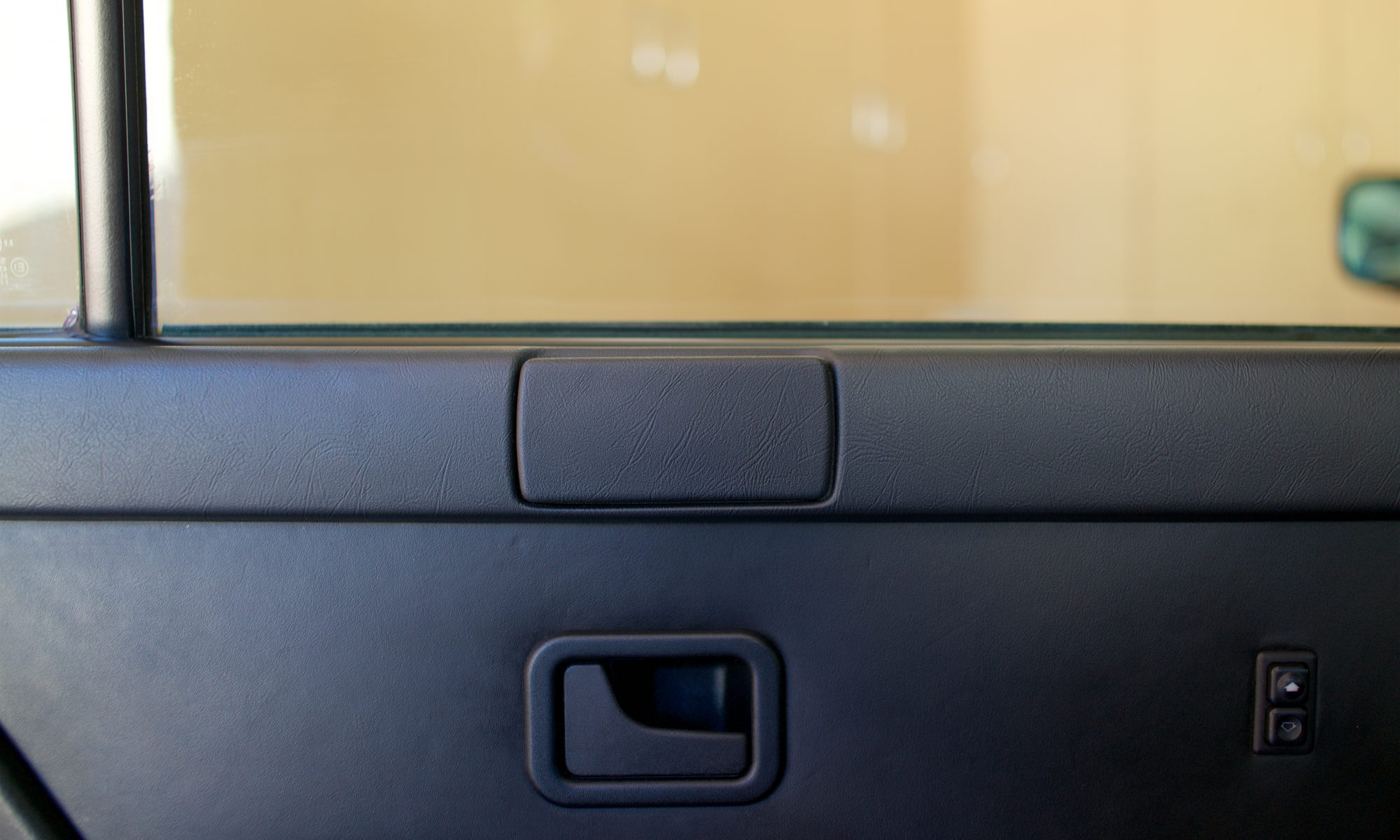 The rear passenger ashtray in the door did not have the right texture or had the texture peeled off. I sourced a proper black one from mye28.com to make it right. 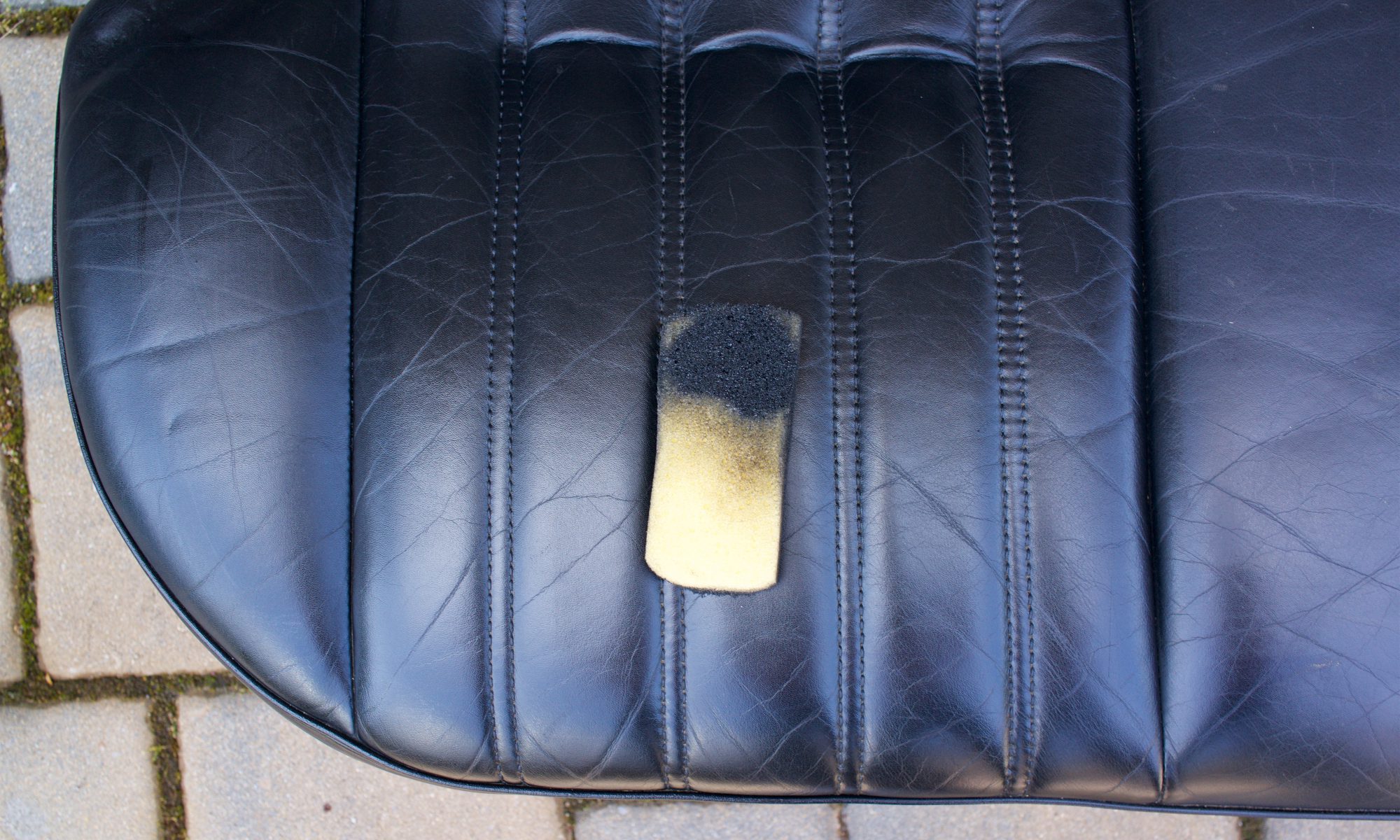 One common failure I’ve seen on a lot of E28 M5s and E28s with sport seats is that the driver’s side bolster sags. This is usually caused when the bottom side bolster seat frame becomes separate from the base at the front of the seat. This car had the same problem when it was delivered (first photo), so when the seats were out after I detailed the interior, I took the driver’s seat to a local upholstery shop for repair. The shop welded the seat frame and also re-stuffed the seats. I wanted to address the broken piping, but it wasn’t clear that they could make it exactly original and it also sounded very involved to undo it.

Each seat had missing or broken parts on the inside hinge covers, so I ordered parts to replace the sliders and screws.

After I got the driver’s seat back, I went about addressing the faded leather. I used a product called Doc Bailey’s Leather Black, which is a conditioner with a black dye in it. It worked really well to bring back the color, shine and luster to the seats. I was very pleased with the results and was happy to put everything finally back into the car. 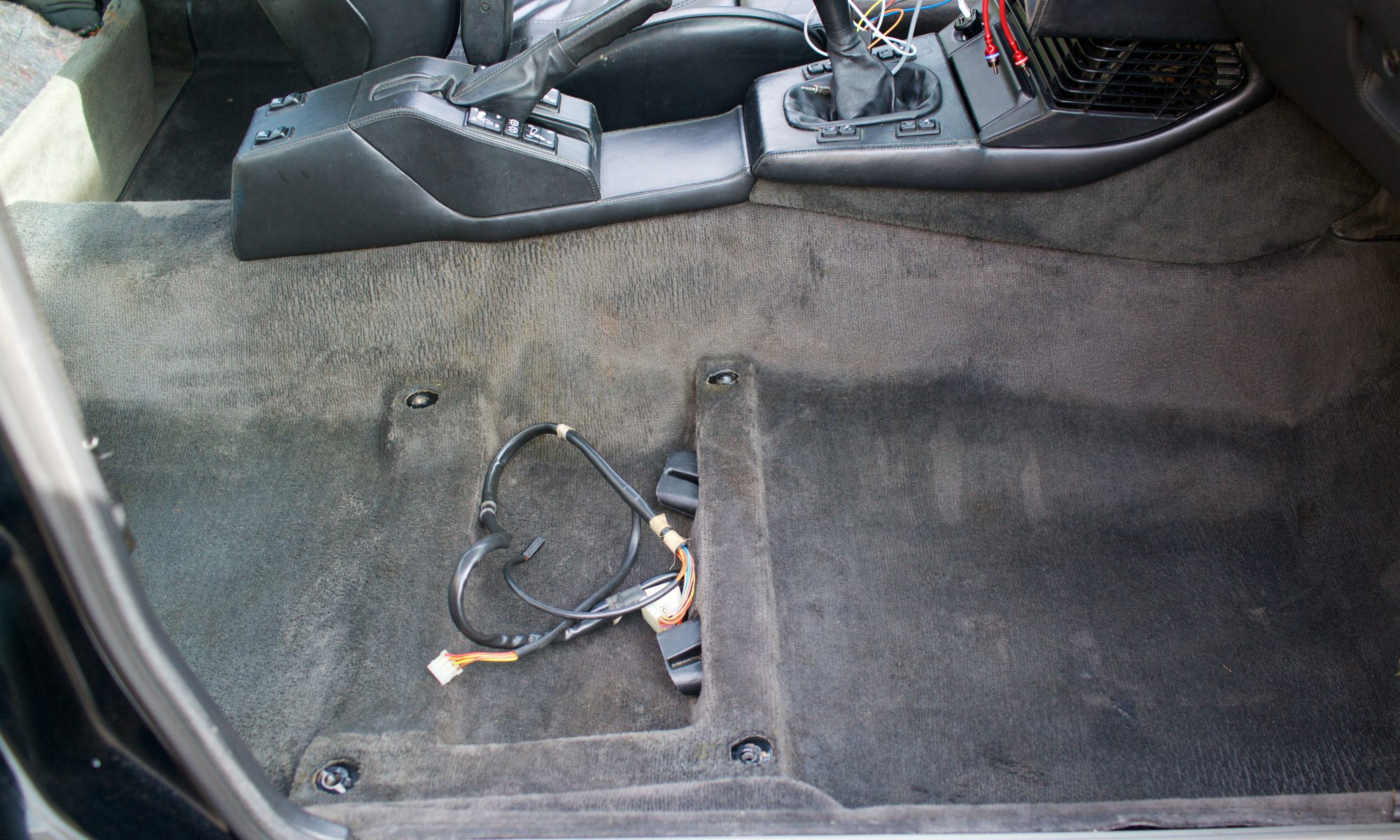 One of my hobbies in my younger years was car audio. In most of my older cars, I’ve typically installed head units with Aux-In capabilities to play or stream music from an iPod or iPhone. My go-to head unit is a Harmon Kardon Traffic Pro. The navigation is useless now that we have Waze and Google Maps, but I like the DIN size, simple look and matching BMW red lighting. I also usually use a/d/s amplifiers and speakers, which are not necessarily period-correct, even if the brand definitely is.

Over the course of months I assembled pieces of the system until it was time to finally install everything. This required removing a lot of the interior, except ironically the dashboard, which had already been through enough. Once all the seats were removed, it uncovered a secondary project, which was to detail the interior carpets. They had accumulated over a quarter-century of mostly coffee stains (pre-cupholder era), chocolate(?), and dog hair. Although the loose change found was not enough to compensate me for my effort, the payoff was a much cleaner car.

I couldn’t get out every stain with the steam cleaner I had. I’ve since acquired a new steamer that might be able to get even more, but perhaps it should be left to a professional with the right chemicals to get everything out (if possible). I also took the opportunity to clean up the front seat bases. Finally, people often comment that the rear deck is somehow blue, but really it’s just sun-faded after all these years. I used some SEM spray paint to bring it back to its Anthracite glory. 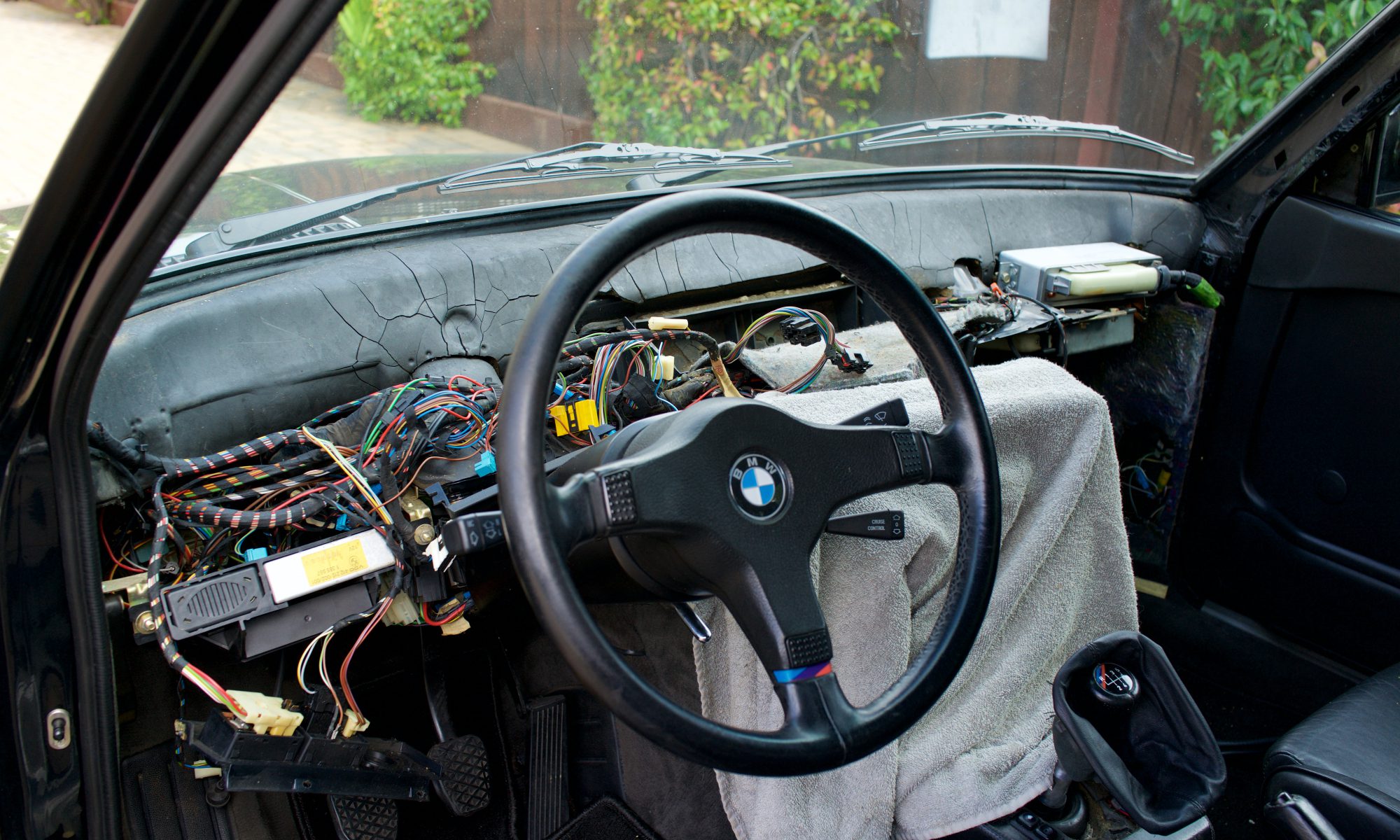 One of the most common issues with old E28s are cracked dashboards. This is usually caused by years of exposure to heat and sun. This M5 was not spared and it was one of the worst issues in the interior known to me when I purchased the car. After owning it for a while, I had gotten in the habit of watching the parts classifieds on www.mye28.com and also searching my local Craigslist.

In January of 2015, my persistence paid off, as a nice crack-free E28 dashboard was found about an hour away. I had cautious optimism, as I had already driven across a bridge once to look at a claimed “crack free” dashboard, only to find that it was covered in small cracks. The seller was apologetic and I learned this is just part of the process. The dashboard I found was not perfect – it had one small tear near the front, which wasn’t visible at all while sitting in the car.

I went through the process of removing the vents and ducts from the old dash, running them through the dishwasher, and transferring them to the replacement. This also included the VIN tag, which required drilling out the rivets. The VIN tag didn’t want to just pop off, so I used a little “gentle” force to drive them out with a hammer. Much to my horror, I had actually introduced a little crack in a thin part of the dashboard! This is just one of the many tough lessons I learned about scarce and NLA parts. Again, just part of the process.

After my horror subsided, I decided that the dashboard, while not perfect, was still a million times better than the terribly cracked original and the rest of the car was not perfect either, so it was pretty on par. I went ahead with what most online posts would describe as a big pain-in-the-ass procedure, especially with the windshield remaining installed.

I’m pretty good at following instructions and there are some good ones out there. Like many of the procedures I’ve followed, this one was found on this site. In the end, it wasn’t too bad and the new almost-crack-free dash improved the interior 1,000%. This was a big win for me. 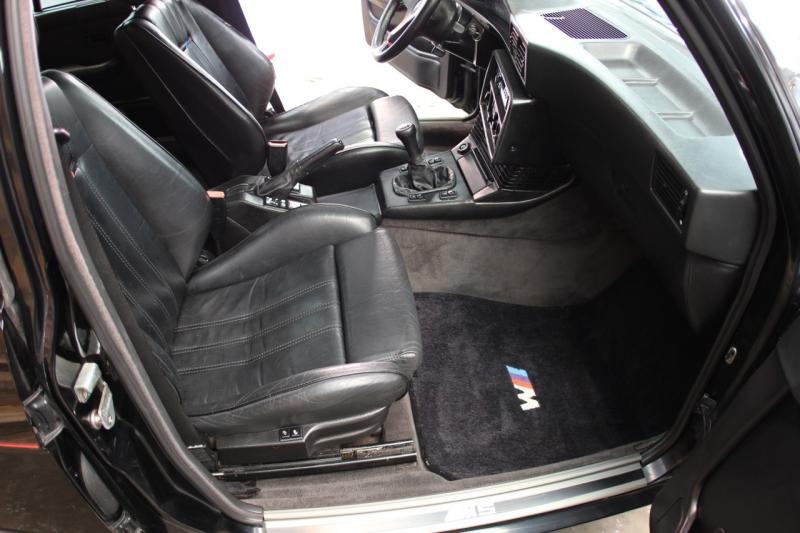 The M5 came with some custom aftermarket floor mats with an “M” logo. They didn’t match the carpet that great and there weren’t mats in the rear. I ordered a new set of mats from Bavarian Auto, which were a simple upgrade. 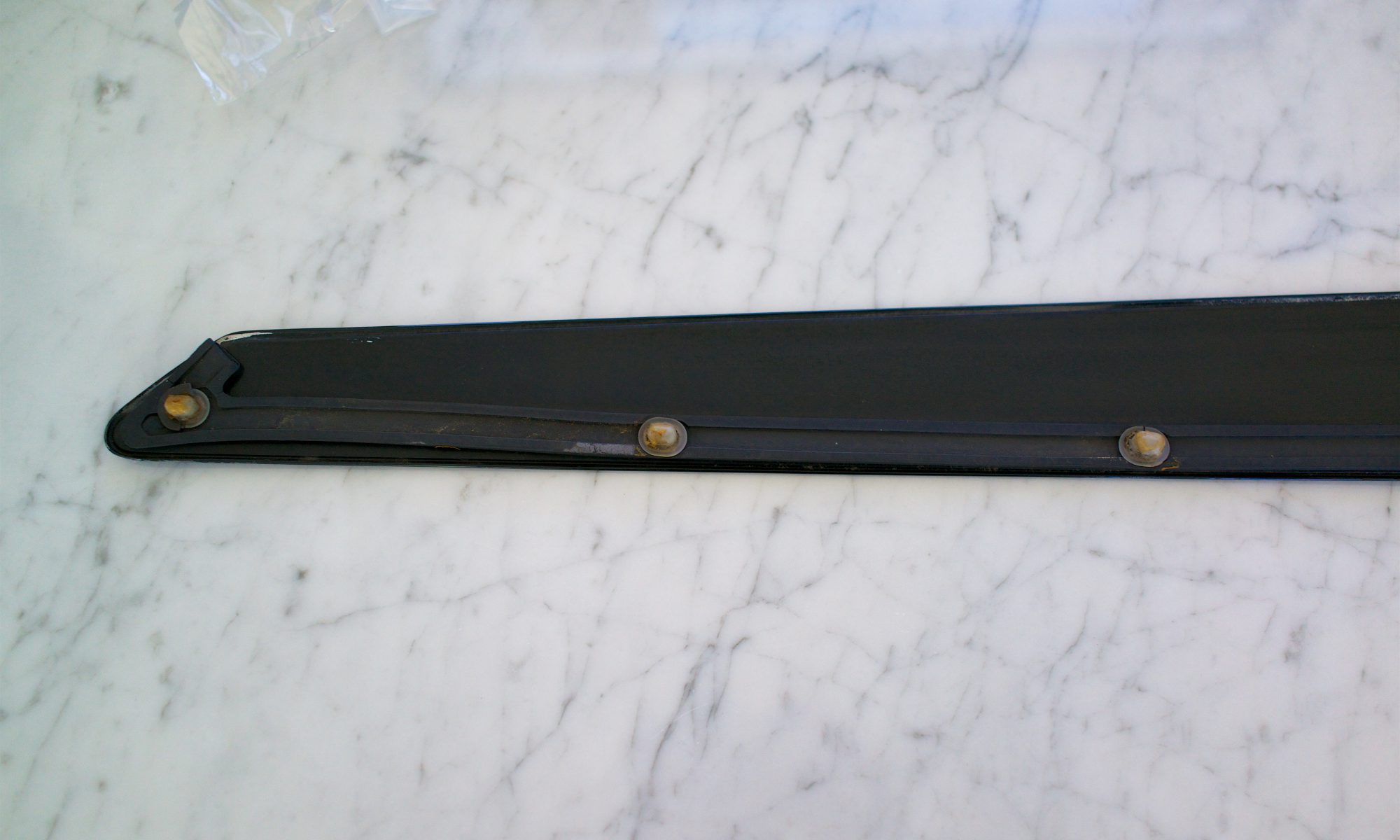 The first actual repair I performed on the M5 was to replace the grommets that secure the “moulding air outlet” on the c-pillar, which were sitting a little proud of the body and seemed like they were at risk of flying off at speed.