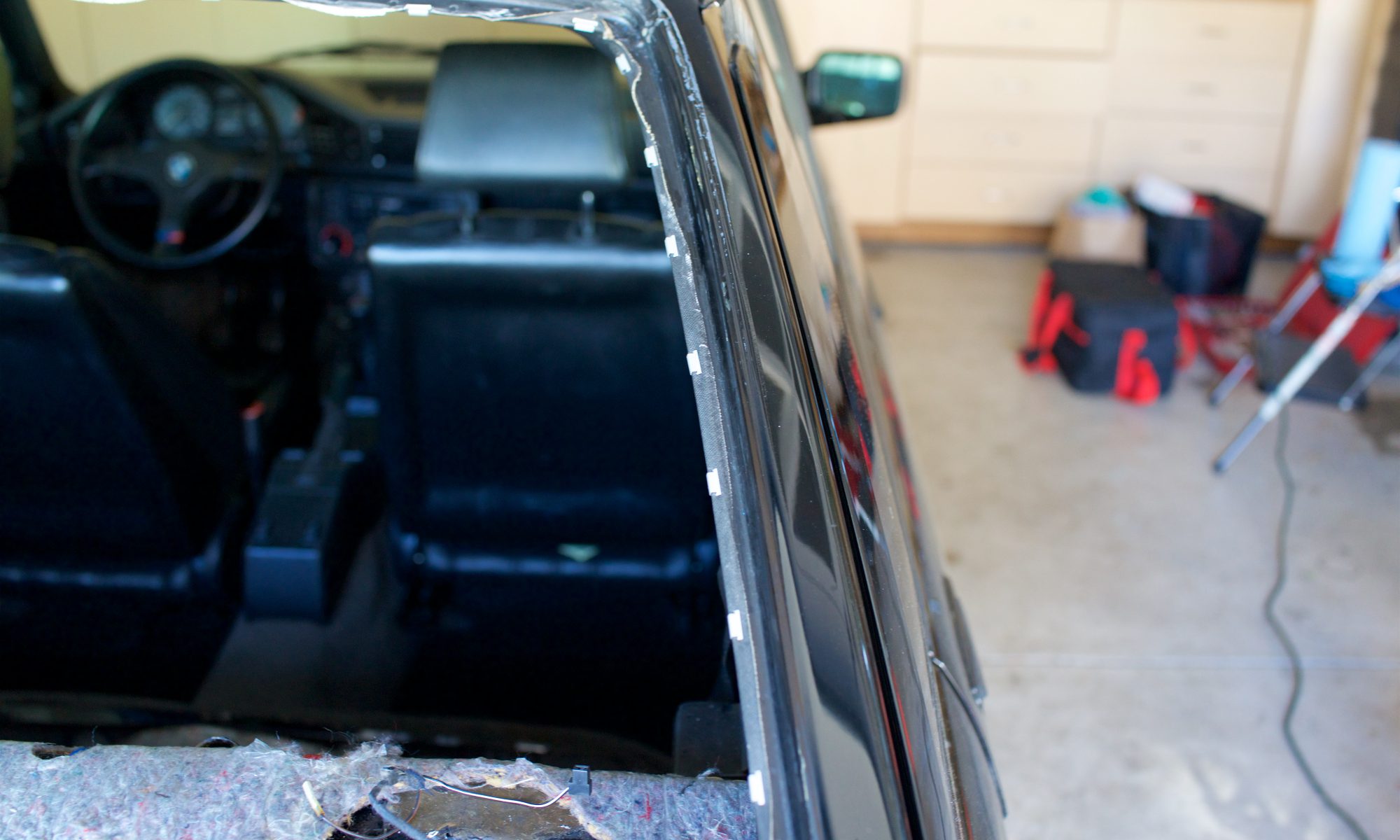 I previously lamented the sad state of my sunroof ceiling headliner. Like I said, I believe the headliner was replaced at some point, but not well. The biggest indication of this was that the headliner on the c-pillars, particularly on the passenger side, was all gathered up. My guess was that they didn’t remove the rear window to do it properly. I can’t say for sure because the driver’s side looks pretty good, so it’s possible that the headliner just came out over time and then gathered up.

In any case, it was very bothersome to me and not something I wanted to just leave as is. After replacing my front windshield, I had some confidence that I could remove and reinstall the rear as well. When I removed the rear glass, I found the headliner was held in place by a little metal clip in only one place, the upper left side, which coincidentally was the side that held up the best. I decided that these little clips were key to getting the headliner to stay in place while reinstalling the glass. I couldn’t find a BMW part number for the clips, so I ordered some on eBay that I thought would do the trick. Even though they were shipped from the UK, they arrived pretty quickly.

After reading some horror stories about the rear window body seams being prone to rust, I admit I was a little worried about opening a can of worms. I did find some rust in the corner and along the bottom seam. I used a rotary tool to grind it off and I was relieved to find that it was merely surface rust and that I got to clean metal just under the paint. As a preventative measure, I covered these spots in POR 15, which is perfect for this type of repair.

Despite reading a lot about being careful with the wiring on the rear windshield defroster, I only unhooked one side before taking it out (I didn’t see the wiring on the other side). Sure enough, the soldered tab broke off. It was easy to solder back on and I was relieved when I tested it and the defroster worked perfectly from both sides.

Unlike the front windshield, the rear windshield did have a clay-like substance as a sealer between the gasket and the body. I cleaned this off from around the body seams and also from within the gasket, which was still in good shape. It looked good as new when I was done.

After the headliner clips arrived, I used them to stretch and secure the headliner to the body. I used some 3M Headliner Adhesive on the very bottom of the c-pillar, as it had previously been glued to the parcel shelf and I believe this is critical to keeping it from getting untucked again. Because it had been gathered for so long, there were wrinkles in the vinyl headliner. I used a heat gun to warm up the headliner so I could stretch it smooth before putting on the clips. There were a few tiny wrinkles still visible, but I believed that reinstalling the gasket with the glass would help to stretch it perfectly smooth.

I used the same exact technique for the rear glass as I had for the front windshield. I installed the gasket first onto the body seams. It didn’t want to stay in place as well because of the angle of the windshield, so I had to use some bungee cords to secure it as I was doing this by myself. I also inserted the aluminum lock strip into the gasket before putting the glass into the bottom. With the Gojo and blue dogbones, I carefully worked the gasket over the glass from the bottom to the top, careful to terminate in the upper right corner. It really wasn’t too bad at all and just as I had hoped, the headliner was now perfectly smooth and taught on both sides and in the corners.

One hack was that I used the E30 Shadowline lockstrip, which is one long piece like the one used on the front windshield. This was a little cheaper than buying the three individual pieces for the left, right and top. The original lockstrip had shrunk beyond the trim pieces in each corner, so I was sure to cut them as long as possible to fit under the corner trim pieces.

I grappled with whether or not to use a sealant, but given the fact that it came with the clay from the factory and the light rust spots I found, I decided it was safer to use it. I used 3M Auto Bedding and Glazing Compound to carefully seal the area between the gasket and the body only (i.e., I did not put it between the gasket and the glass because it’s not needed there).

I was now very happy with the headliner, I abated some very minor rust, and the rear window now looked new with the new lockstrip. I’m gaining confidence in my restoration abilities!