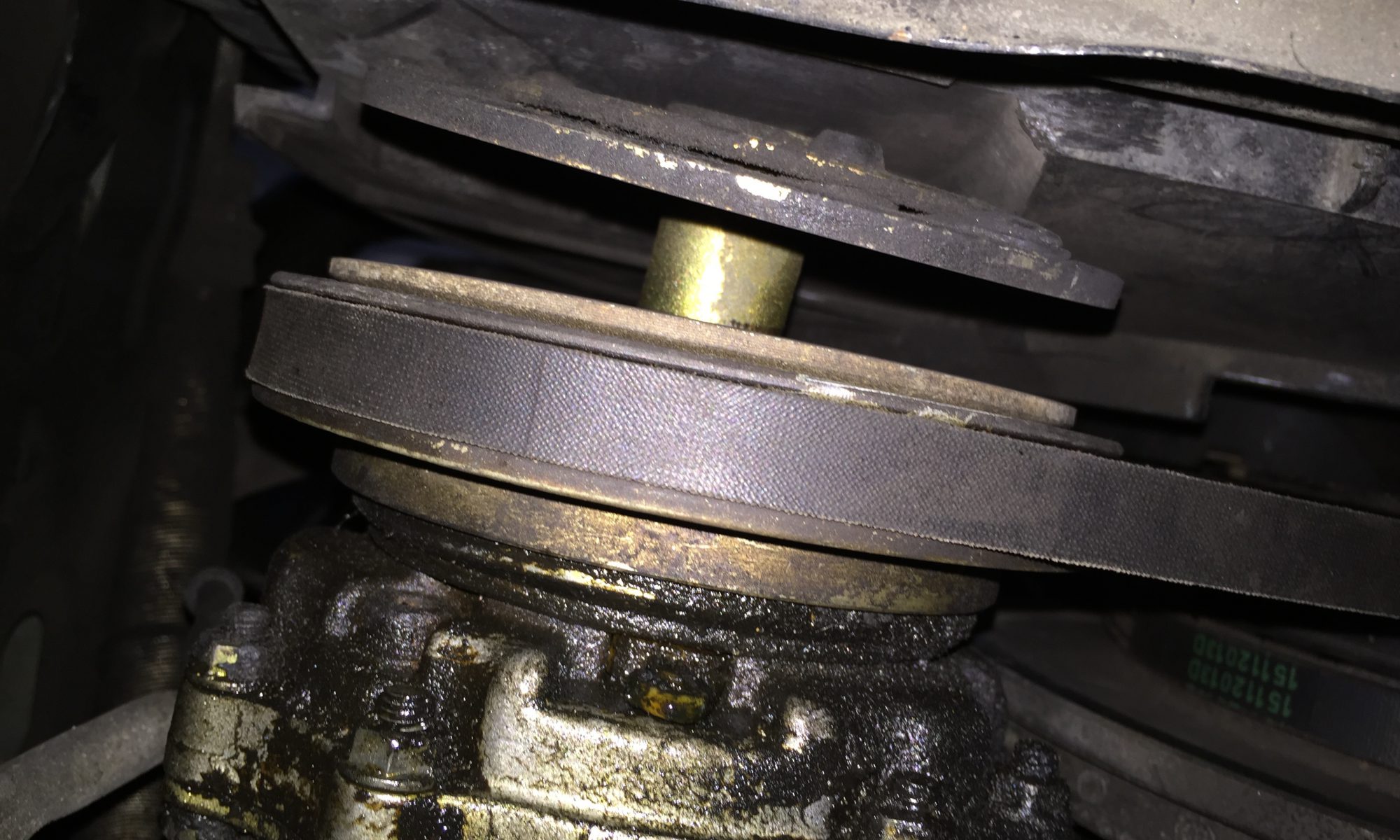 One of the most pleasant surprises about the M5 was that the A/C always blew ice-cold since the day I got it. This was one of the few times when I was able to return some knowledge to the mye28.com community. The whole thread is included here, but here are the relevant posts with links.

The A/C on my E28 M5 was blowing ice cold. However, yesterday, it stopped working suddenly during my commute. Checked the forums, fuse, switches and then visual inspection of the compressor indicated the issue.

The clutch plate has backed itself out. I’m not sure if it oscillated itself out that far, but there isn’t enough clearance for it to fall out. Despite it backing this far out, it won’t go back in any further by hand (just wobbles on the shaft).

I saw some similar threads, but none were resolved. Thus, I have several questions.

1. Does this look serviceable? If I drop the compressor should I be able to tap this back onto the shaft? Is there a bolt that is meant to retain the clutch plate?
2. The compressor was working fine, so if the whole clutch itself looks toasted, should I try to just R&R that part? There seem to be two different compressors (Seiko and Bosch/Behr), which have specific clutch parts (and I only found the Seiko-compatible clutch on initial search). Is it possible to tell from these photos which one is on my M5? The Seiko is 64 52 1 386 601 and the Bosch/Behr is 64 52 1 386 297.
3. The available clutch part is pretty expensive. Should I just replace with a remanufactured compressor+clutch, even though my compressor and A/C was working fine? If I replace it, does it matter which one 64 52 8 385 713 or 64 52 8 363 550?
4. Unfortunately I don’t have the full history of this car. Does the blue valve in the photo below indicate that the A/C was converted to R134? Is there some other way to tell?

Thanks in advance for any advice.”

I ordered a set of Sanden compressor adapter plates. I figured I had nothing to lose to try to fix the clutch plate. I pulled it down and after fiddling with it a while, I realized why the clutch plate wouldn’t easily re-insert. There is a slot on the shaft of the compressor, which has a key in it. It had fallen out of the slot and was now blocking the clutch plate cylinder from going in. After pushing the key back into the slot and lining up the clutch plate, it popped right back in. I was surprised, because I had read about needing a special puller to get it off.

I cleaned as much as I could while I had it apart. One interest I had was getting the make and model of the compressor currently on the car. FWIW, it’s a Behr 64521380919, which appears to be replaced by a newer model.

Once I got everything back together, the A/C blowed cold immediately. After inspecting the clutch, I could see it catching and turning, even when it wasn’t supposed to be engaged and also when the A/C was completely off. Something was wrong.

I took the kids to swim class and forgot my phone. So, instead of researching the internet for a solution, I was forced to just contemplate my problem. It dawned on my that I had one extra washer left over after reassembling everything (not the first time this has happened). I realized this must be what is used to air gap the clutch.

I took the compressor down again (which went a lot faster the second time – also not the first time I’ve had to fix things a second time). Now, however, the clutch plate wouldn’t just pull off. I feared I now needed the special puller. Coincidentally, I pulled a groin right about then, which slowed me down and also gave me time to think. I cleaned while I considered my options. I didn’t really want to jam screw drivers in there to pry it off. The outside of the plate is threaded, but I knew I didn’t have a bolt that large in my possession. It was about the size of garden hose. Wait, I have one of those. So I dragged it around from the yard and threaded it right in there. With the proper application of the foot wedge, I was able to yank it right off. I was pleased.

Disclaimer: this is a bush fix as it’s clear the threads of a garden hose don’t match the metric ones on the clutch plate. Use this method at your own discretion.

I could see now that the pulley spun freely, which I should have checked the first time had I known at the time. The A/C was now working perfectly, with the compressor cycling on and off as needed.

Hopefully these photos and tips will help someone in the future. I’ve learned so much from this board. Last weekend, I replaced a broken wiper assembly. On Monday, I replaced a frayed accelerator cable, which had frighteningly got stuck at WOT a couple of times in traffic. It always seems to be something with the M5, but so far I haven’t let it defeat me.

One last final bush tip: a kid’s mini basketball works great to support your head and neck while under the car. Cheers!