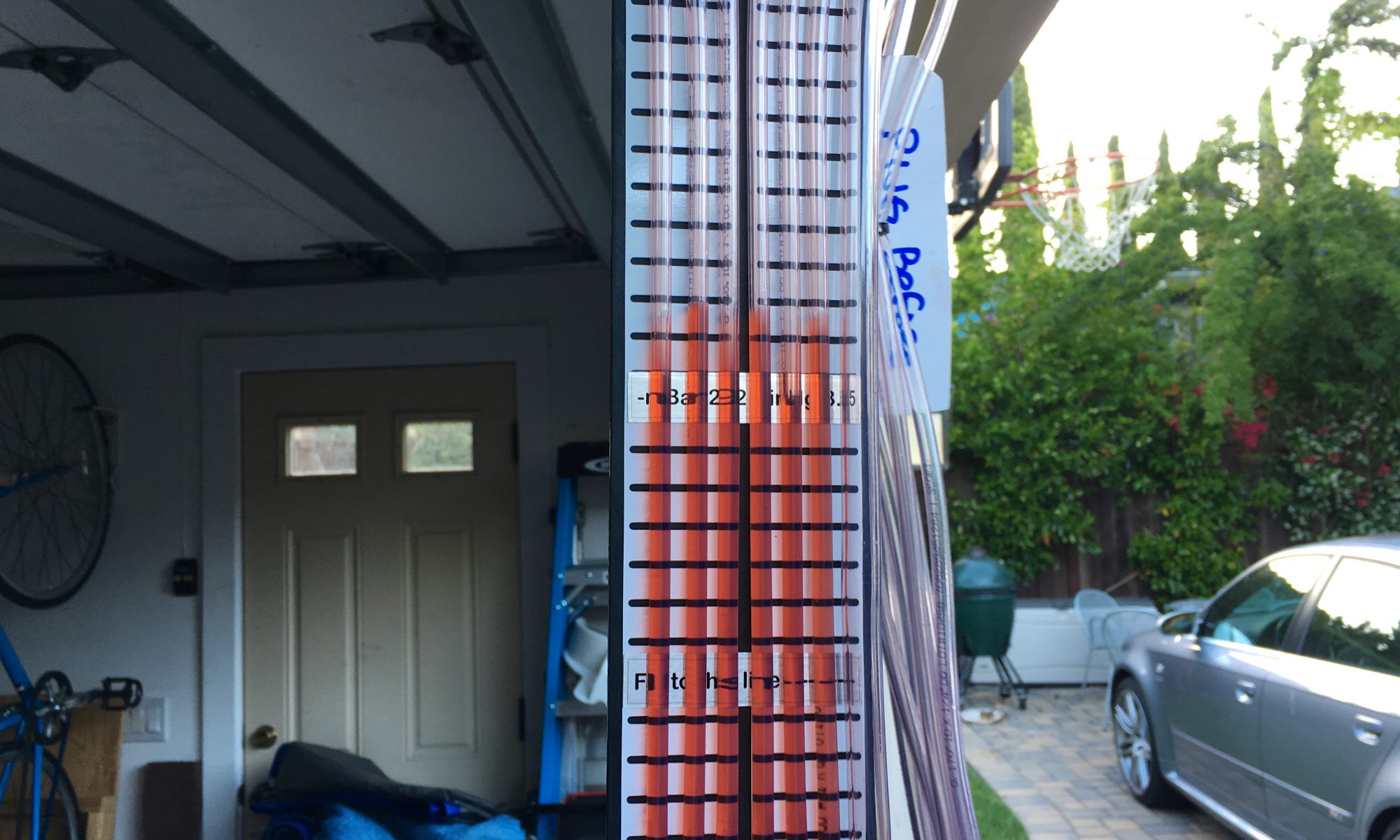 In anticipation of finally buttoning up the intake, I needed a special tool to synchronize the six individual throttle bodies. Rather than buy a 4 column Carbtune or try to build my own, I just rented an invention by Dean on the mye28.com forum, called the Mantis Manometer. I had also purchased an digital laser tachometer to measure the engine speed.

First, after over a month of sitting in various stages of disassembly, the M5 fired right up (after building some fuel pressure). This was such a huge relief after all this effort. Right away, I could tell it was running better.

I confirmed that the throttle position switch (TPS) was adjusted correctly and that the engine was in the correct idle state. I measured the voltage on the connectors to the TPS and they were correct. I could also hear the ISV buzzing with the ignition on (but engine not running), so I knew it was getting current. I couldn’t hear it in the open air, but I could with a screwdriver on it and pressed to my ear (am I going deaf?).

My worst fear was that the butterflies were too open from my mechanical adjustment, though I was pretty confident in what I did, especially after trading some emails with Dean, who was extremely helpful throughout the troubleshooting. I hadn’t even yet hooked up the manometer because it would have been useless until we could dial in the base idle speed.

Not only was the engine idling high, but once warm it was surging to 1,300 and then falling back down to 800-1,000, indicating that the ECU was cutting off fuel/ignition as the idle climbed above 1,300.

I started to suspect the ISV, as it was one component that I didn’t clean directly (because I didn’t even know what it was at the time). I had soaked the entire unit with the hoses attached for days, but perhaps that wasn’t enough. I had to remove the disconnect the intake from the throttle bodies again to move the intake and plenum out of the way enough to gain access to the ISV. I disconnected the hoses and was able to remove it.

I bench tested it using a 12V power supply, and sure enough, the ISV was stuck in the open position! This would explain the high/surging idle. I used liberal amounts of throttle body cleaner (I’ve come to believe all of the CRC cleaners are exactly the same thing, just packaged differently). Between soaking and scraping, I was able to get the ISV clean enough to be able to “flick” the valve open and closed. I then also tested using 12V to ensure the valve would open and close with the correct positive/negative voltage applied.

Once I put it all back together again, the idle surging was eliminated and I was now able to use the main idle screw to get the idle down to the range of 850-900. I hooked up the Mantis Manometer and gave was able to synchronize it initially, but I still felt the idle was a little high. I was also experimenting with different settings for the CO adjustment per these instructions.

I was feeling some time pressure to return the tool before the holiday weekend, even though Dean told me to take my time. Over the next couple days, I experimented with the tool and different base idle and bypass screws. Once I closed the bypass screws enough, that brought the idle down enough to be able to use the big idle screw to set the throttle. Now that I was in the high range, I adjusted the individual bypass screws to synchronize the vacuum across all six cylinders.

A couple of my tweaks to the process is that the throttle synchronization must be done with the TPS bridge installed. This was discussed in the mye28.com thread, but wasn’t explicitly in the laminated instructions. Also, I found that the oxygen sensor voltage would not dither once the TPS bridge was installed. Once I accepted these observations, I felt that my CO was adjusted correctly (which had a big impact on how smoothly the engine idled), the engine was idling around 900 rpm when warm, and the throttles were synchronized.

The M5 has not run better since I’ve owned it. Even my wife and kids could tell just by listening to it.