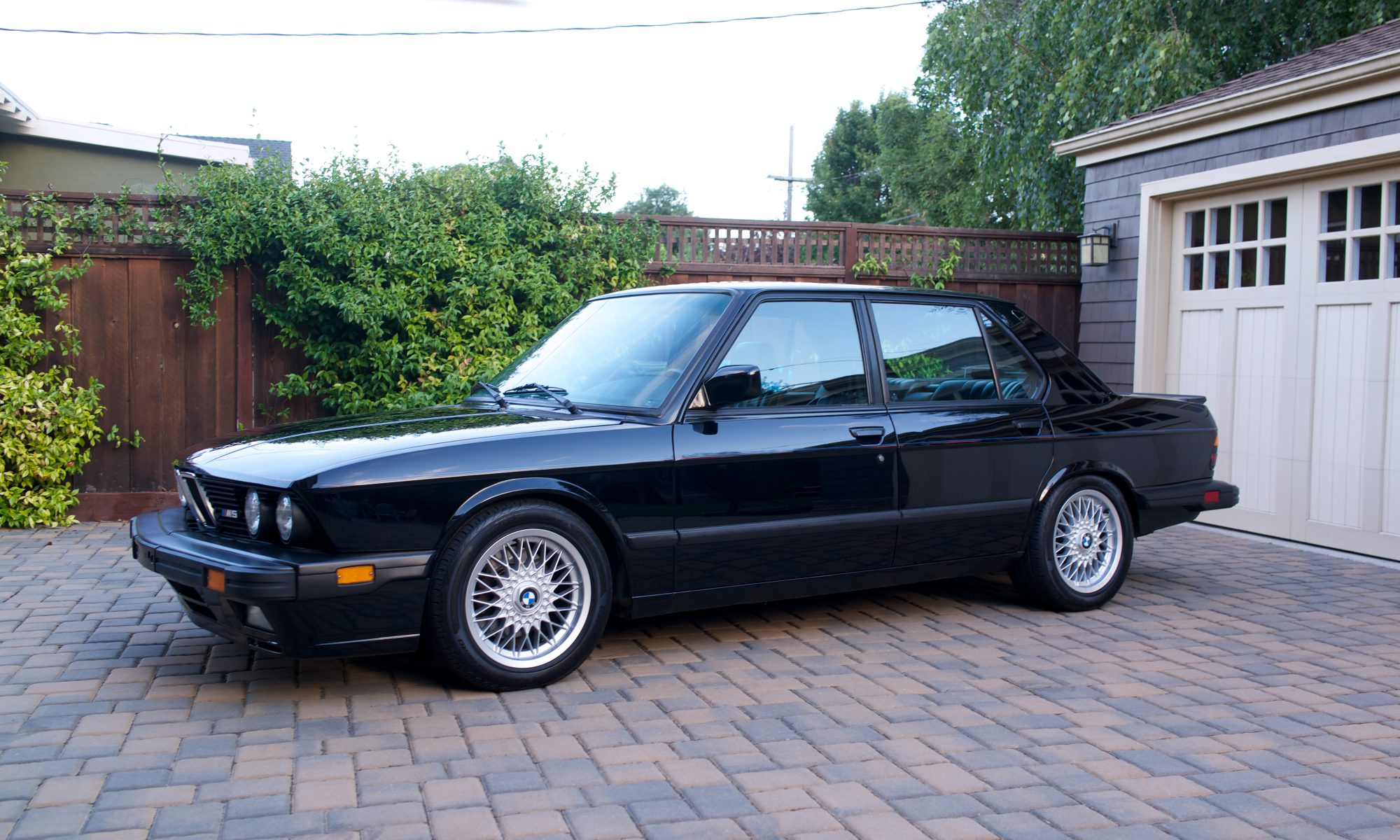 The 1988 BMW M5 has been on my automotive bucket list since the list existed. In 1988, I was making $3.35 an hour, so this car was just a bit out of reach for a senior in high school. At the time, this car was a little too adult for me anyway, and the E30 M3 was more my speed, but equally out of my universe.

I believe the first M car I ever drove was my friend Jeffrey’s dad’s car, which was an M6. It had the same drivetrain as the M5, but was even more refined, with a leather dash and headliner and a beautiful Lotus White interior. The first M5 I ever drove was sometime at the end of college. It was on the used car lot of a BMW dealership in Flint. My friend, Christine, and I were on our way to volunteer at a summer day camp when I spotted it and veered off the freeway to take a look. She posed as my better half and was coached to not allow me to purchase the car, which in reality I couldn’t dream of affording.

That test drive ultimately satisfied my interest for a decade or two. The truth is, I’ve always been on the hunt for one of these. Anyone familiar with my automotive history knows I prefer sometimes odd, always rare, German cars. I’ve managed to check a few really great ones off the list the list. The 1988 E28 M5 meets the criteria with only 1,340 cars produced for North America: all of them model year 1988, all of them black, and (almost) all of them with a tan leather interior.

I never really liked the tan interior and most have held up very, very poorly. I have come to strictly prefer black interiors in all my cars and there happened to be 101 M5s built with a black extended leather interior for North America. Only 30 of these ended up in the US, with the rest built to Canadian (i.e., metric) specification.

This unicorn is one of those thirty – “1 of 30” as they’re often described. I’ve been looking seriously for an occasional third car and had a strong lead on another black on black in Portland earlier this year, but the timing just wasn’t right and I missed the opportunity. The trail went very cold and I diverted my attention to late 60s – early 70s Mercedes sedans.

Last month, this car popped up on eBay. I don’t know what kind of deranged people get in a bidding war for a 26 year-old car with 173K miles, but I was one of them. I was the high bidder with 90 seconds to go and feeling good. In the last 10 seconds, the bids went crazy, closing at a price I wouldn’t have considered. I was crushed.

A week later, I thought, what if the sale didn’t go through (as is often the case)?  Sure enough, the car was re-listed due to “non-paying winner.”  I settled in until the end of the second auction and put in a bid with about 30 seconds to go. Everyone’s cards were on the table and thankfully I won at a price much less than my reserve. I was elated.

Or, perhaps I was over zealous and impulsive?  This is the 3rd car I’ve bought sight-unseen on eBay. This was the most excited and nervous I had been to receive a car, which was shipped from Nashville, TN.

As the car was backing off the truck, I took a photo and sent it to Jeffrey. He responded, “A breech birth.”  We’ve been emailing/texting almost daily during the car search. For years, we’ve corresponded about cars, most of which we couldn’t or shouldn’t buy. Then one of us does something like this and there is consoling.

I will admit that upon initial inspection, I had some buyers remorse. It’s hard to tell the condition of a car in photos, especially one that was photographed so beautifully. It’s easy to be fooled by good lighting and glamour shots. The interior was also a lot rougher than I had expected.

“What have I done?” was the thought that kept going through my head as I spent the first couple hours with it. After a quick shake down drive up the hill and down the 280, I verified the car ran and stopped. I was very pleased that the A/C worked, which isn’t often the case with these cars. The car was pretty dusty from its cross-country trip, so I got it washed. It still looked ragged, especially in the unforgiving California sun. I got it smogged, and thankfully it passed.

I did another loop up the hill, down the beautiful 280, and off on Skyline Blvd and Crystal Springs Blvd. It felt great cruising with the sunroof and windows open (except for the one that doesn’t work). At a rated 10 MPG and with only a 16.6-gallon tank, it doesn’t take long to get to empty. I pulled into a gas station in an area I’ve never been. There was a guy in front of me filling his VW Golf. A typical gen-Yer would be forgiven for not knowing what this car was, but this young car guy came back to his car looking at the M5, shaking his head, and said, “Looks good, looks real good.”  I felt a little better.

Despite the many amenities (especially for its day), there is nothing modern about this car. The steering wheel is positioned similar to that in a school bus, there’s so much play in the gear shift that I had no idea if I was choosing reverse or 3rd, and it smelled a bit much of the tacky leather conditioner that seemed to cover everything. There was also a tinge of exhaust fumes and I already smelled like I just mowed the lawn.

I had checked the oil and getting back on the 280 I decided to get on it and see what it could do. Winding it up to its 6,900 RPM redline, the car really came into its own. At full boil, the 3.5L inline 6-cylinder sounds like a swarm of hornets attacking a wolverine, or a badger, or a buckeye (not an animal, i know – well…). My M Coupe’s S54 engine was perhaps the pinnacle of BMW’s normally aspirated straight-6 design and was much more refined. The S38B35 engine idles like a NASCAR, rumbling and burbling. However, the experience of winding it out is both visceral and intoxicating.

With no traction control, it’s easy to get the tail out. Somehow it chirps its tires while either up or downshifting to 2nd. It also stops like a boss. While driving it home the way it was meant to be driven, all my remorse and fears washed away.

I’ve had a few days to come to grips with bringing this thing home. This particular car is very original. However, with its mileage, it will never really be collectable. But, I’m not a collector. I’m happy to be its steward, tend to its needs, and perhaps make it even better (though never younger) for the next enthusiast to enjoy. That person will likely be equally deranged and will most likely have come of age during the 80s.